The death toll in the Christmas market attack in Berlin could have been much higher. But the truck's automatic braking system, adopted by the EU in 2012, stopped the vehicle after just 70 meters, according to reports.

The truck that plowed into a Berlin Christmas market last week, killing 12, came to a halt due an automatic braking system, according to German media reports on Wednesday.

The automatic braking system potentially saved the lives of many more people in the recent terrorist attack.

An investigation by newspaper "Süddeutsche Zeitung" and broadcasters "NDR" and "WDR" found the Scania R 450 semi-trailer stopped after between 70 and 80 meters (250 feet). The system was reportedly engaged after sensing a collision.

Previous reports speculated that the truck had driven erratically and stopped due to the heroic actions of the truck's Polish driver, who lay fatally wounded in the cabin.

More than 80 people were killed in a similar attack on Bastille Day in Nice last July, when a 19-ton Renault Midlum truck was deliberately and repeatedly driven into crowds.

The regulation was adopted to reduce the number of rear-end collisions by trucks. The Tunisian hijacker Anis Amri allegedly rammed the truck into the Christmas market near the iconic Kaiser Wilhelm Memorial Church at around 8:30 p.m. local time as locals and tourists gathered to enjoy the evening.

Six Germans were killed in the attack, as well as people from the Czech Republic, Italy and Israel. Forty-eight people were wounded.

The truck had Polish license plates and was carrying steel beams.

Amri fled the scene and was later shot dead by police in the northern Italian city of Milan days later.

On Wednesday, German policearrested a 40-year-old Tunisian man on suspicion of being an accomplice in the attack, which was claimed by the so-called "Islamic State."

Local media also reported that Amri had sent a selfie and the message "pray for me my brother" from inside the truck just minutes before the attack.
Najgore je svađati se sa budalom. Prvo te spusti na svoj nivo, a onda te dotuče iskustvom... 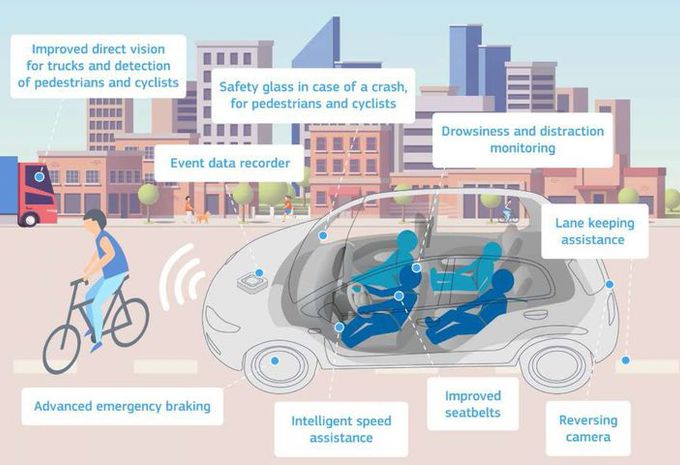 The European Commission has announced a fresh set of safety proposals, which would force all new cars to feature autonomous emergency braking, lane keeping assistance, reversing cameras, and driver fatigue detection by 2021.

A total of 11 systems will become mandatory for new cars introduced to the market by that date if the proposals are approved, saving an estimated 7,300 lives and preventing 38,900 serious injuries between 2020 and 2030.

Autonomous emergency braking (AEB) has long been expected to become mandatory on new cars. The system - which automatically applies a car’s brakes if a driver fails to slow for an obstacle - is thought to reduce rear-end collisions by 38 per cent. Reversing cameras, meanwhile, recently became mandatory on new cars sold in America, and are predicted to save 95 US lives a year.

Under the proposals, all new cars brought to the EU market from 2021 must also feature ‘over-ridable intelligent speed assistance’. This will entail traffic sign recognition cameras working in harmony with a car’s speed limiter, automatically setting a car's top speed based on prevailing limits.

New cars will also have to be fitted with accident data recorders by 2021, logging telematics information following any collision. Pre-wiring for alcohol interlocks will also be required, allowing problem drink-drivers to easily have an interlock device fitted. This would prevent a car being started without a 'clean' sample of breath being provided.

New vans brought to market by 2021 will be subject to the same proposals, though they won't have to come with advanced emergency braking.

European lawmakers have been key to improving road safety over recent years, mandating the fitment of electronic stability control and Isofix child seat mounts to all new cars certified since 2011. Anti-lock brakes, meanwhile, have been fitted to all cars sold in the EU since 2004.

Traffic fatalities across the EU fell by 43 per cent between 2005 and 2015, but safety chiefs are concerned that the decline has slowed since 2014, with 25,300 people dying on EU roads last year. The new safety systems are being made mandatory in order to help achieve the EU’s Vision Zero project, which aims to move “close to zero fatalities and serious injuries [on the road] by 2050”. An interim target of a 50 per cent reduction is in place for 2030.

While consumers may well be concerned that the addition of more mandatory safety systems will push up the price of cars, the European Commission says its analysis shows it will “have little or no impact on the price of new vehicles.” It has set aside €450 million (£393 million approx) to EU member states “contributing to road safety, digitisation and multimodality [transport logistics]”.

Other systems set to be introduced over coming years include pedestrian and cyclist detection for lorries, while the Commission will help EU member states “systematically identify dangerous road sections” in order to “better target investment.”


Announcing the new safety measures, the European Commission’s head of markets, Elżbieta Bieńkowska, said: "90% of road accidents are due to human error. The new mandatory safety features we propose today will reduce the number of accidents and pave the way for a driverless future of connected and automated driving."

The proposals have been welcomed by the UK’s Parliamentary Advisory Council for Transport Safety (PACTS). The PACTS executive director, David Davies, says the council “urges the Government to get behind the Commission’s proposals and ensure that they are adopted without delay”. Davies added adopting the new rules would be a “free lunch” for Government, as they would “not require Government spending”.
Najgore je svađati se sa budalom. Prvo te spusti na svoj nivo, a onda te dotuče iskustvom...