Lasers, wipe-action indicators and speed-sensitive swarms of organic LEDs could be piercing the night sky to illuminate future Audi models and their paths if pioneering development projects by the Vorsprung durch Technik brand are given the green light.

Audi already leads the field in lighting innovation and its LED expertise is now being applied to headlamps in A6, A7 Sportback and A8 models.

The engineers responsible for cementing the brand’s position as the innovator in automotive lighting are continuing to push boundaries by developing systems that will be capable of reacting even more intelligently not only to environmental
An OLED swarm being demonstrated.

The most dramatically different of these, at first glance at least, is the OLED swarm.

This transforms the rear of the car into a large, continuous illuminated surface on which a large number of small points of light fluctuate like a swarm of bees or a shoal of fish.

Movements of the red dots take their orientation from movements of the vehicle, so when a right turn is made, for example, they flow to the right, and when the car is braked they flow rapidly forwards.

The swarm is comprised of ‘Organic Light Emitting Diodes’ (OLEDs), which differ from today’s LEDs in that they are formed from an organic material rather than semiconductor crystals.

In its basic form the organic material is a paste that can be applied at a depth of just a few thousandths of a millimetre to a flat surface.

When an electrical voltage is applied, the molecules in the paste emit photons and the surface lights up.

OLEDs have great potential for many other applications, as proven by the recent A2 concept, which is embellished by a thin band of OLED light connecting its headlights with its tail lights.

When the A2 concept is in standby-mode, the band is coloured black, but when the key-holder approaches, it lights up blue and intensifies illumination of the door handles.

When the concept is in motion it shines bright orange, and pulses on the corresponding side when the indicator is activated.

When braking, a red pulse of light runs along the flank as a warning for other road users.

A rear fog light that uses a laser diode.

This concept of seemingly transient light has also been applied on a slightly simpler scale in new, more advanced indicator lights that appear to perform a wiping movement from the inside outwards, making them more noticeable than even the latest LED indicator systems.

The wipe is achieved by a horizontal row of LEDs that are illuminated in successive blocks.

LED headlamps as we know them today are also set to evolve as a result of work by Audi on matrix beam technology, which groups together numerous small individual diodes backed by lenses or reflectors to provide precisely targeted illumination without the need for a swivelling mechanism – the lights are simply switched on and off or dimmed to suit the situation.

Matrix beam headlights obtain the information they need from a camera, from the navigation system and from additional sensors.

If the camera detects other vehicles or the lights of a built-up area ahead, the headlights fade out the appropriate sector of the high-beam headlight matrix.

They are already aware of the topography of the road and can also vary the illumination they provide according to weather conditions such as rain or fog.

In the more distant future, the matrix beam lights will be capable of picking out important objects in the driver’s field of view and either illuminating them more directly, if the object is a person, animal or road sign, or diverting their light pool around them if the object is a vehicle either travelling ahead or oncoming.

Lights requiring even greater intensity than headlamps may reap the benefit of advanced laser technology in future Audi models.

Engineers are developing a rear fog light that uses a laser diode to project a bright, clear red line onto the road surface if visibility is moderately good. The width of this line depends on how far behind the following car is travelling - if it is 30 metres or more behind the line is about as wide as the car.

In fog or spray, the laser beam strikes the water droplets in the air and makes them visible; the laser rear fog light then takes the form of a large warning triangle.

While many of these technologies are still very much at the drawing board stage, Audi can already justifiably claim to be at the forefront of lighting innovation.

It was an early adopter of high intensity xenon gas discharge technology for headlamps, and offers them right across its range, and it was a trailblazer in the field of LED daytime running lights, the now much imitated automotive ‘jewels’ which also have proven safety benefits.

Now, it is back in the vanguard with LED headlamp technology, which is already available as an option for A6, A7 Sportback and A8 models.

The LED headlamps use a total of 54 LED light sources to give a daylight-like beam with exceptional contrast and even lower energy consumption. 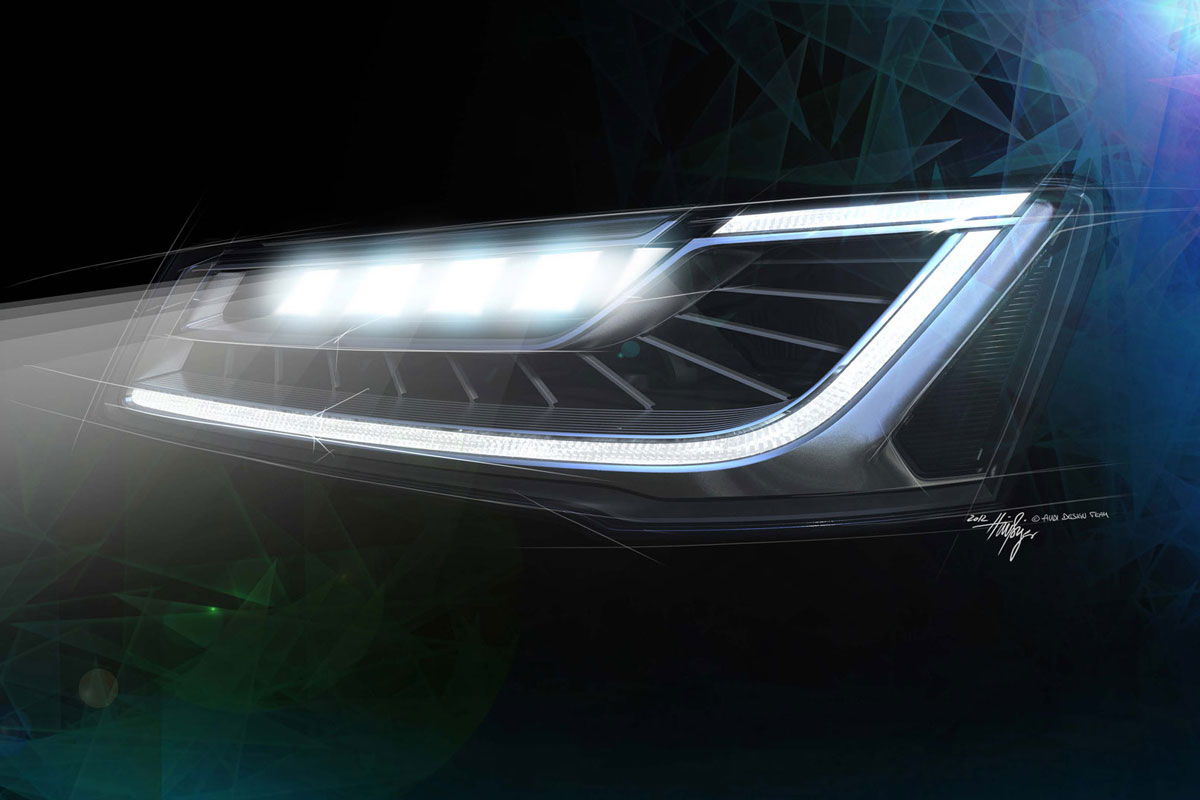