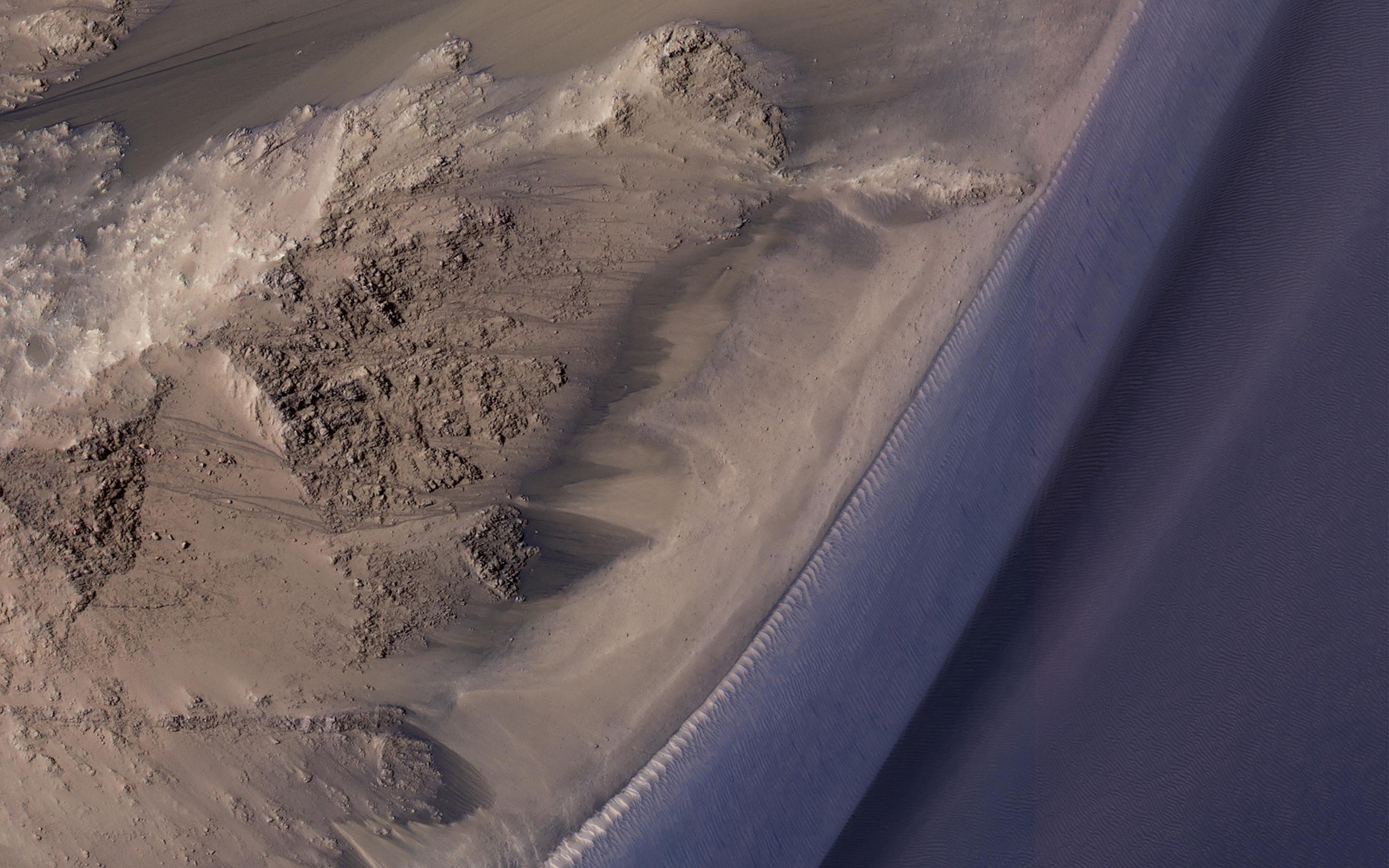 Recurring slope lineae (RSL) are seasonal flows on warm slopes, and are especially common in central and eastern Valles Marineris, as seen in this observation by NASA's Mars Reconnaissance Orbiter (MRO). This image covers a large area full of interesting features, but the enhanced color closeup highlight some of the RSL.

Here, the RSL are active on east-facing slopes, extending from bouldery terrain and terminating on fans. Perhaps the fans themselves built up over time from the seasonal flows. Part of the fans with abundant RSL are dark, while the downhill portion of the fans are bright. The role of water in RSL activity is a matter of active debate. 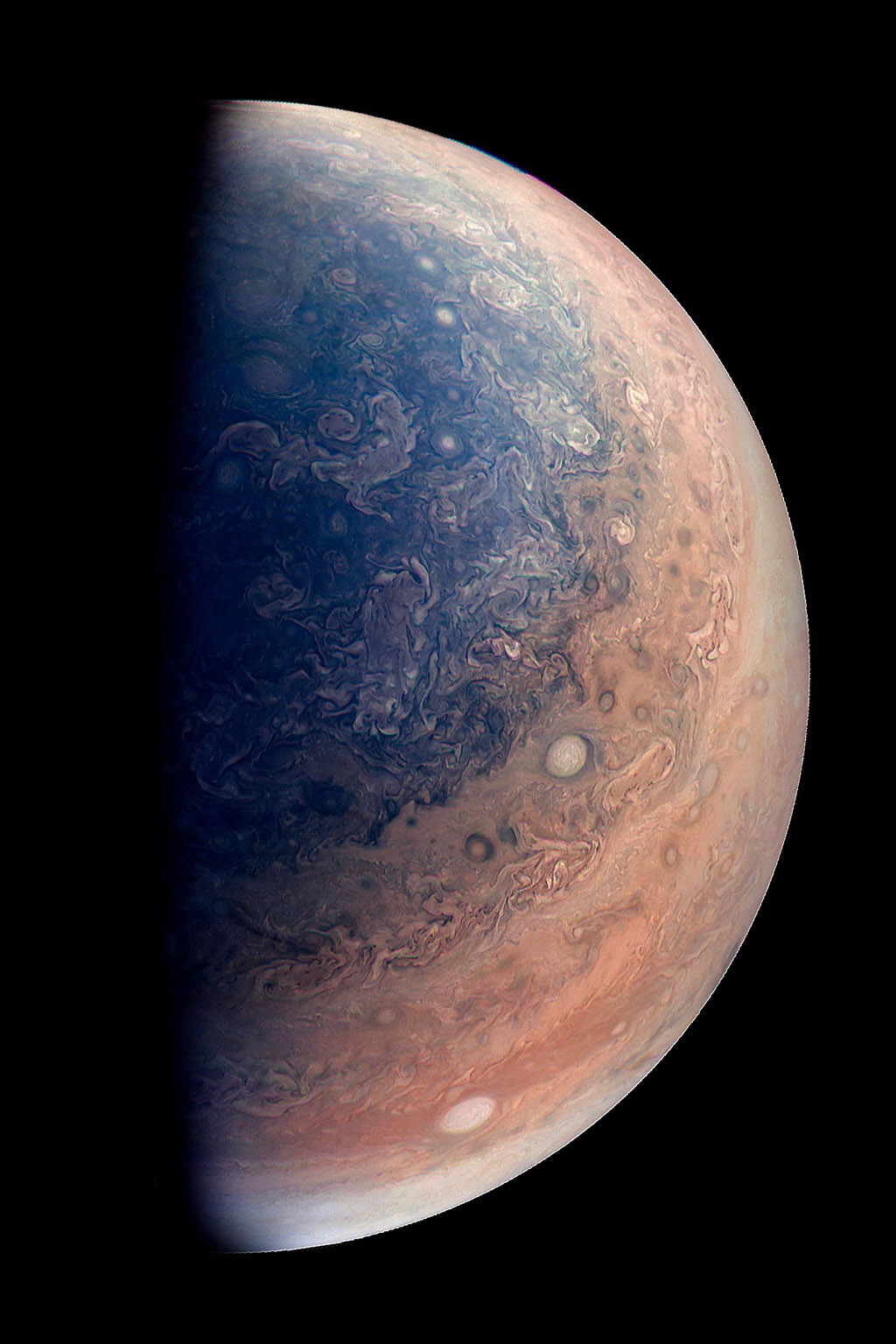 JunoCam's raw images are available at http://www.missionjuno.swri.edu/junocam for the public to peruse and process into image products. 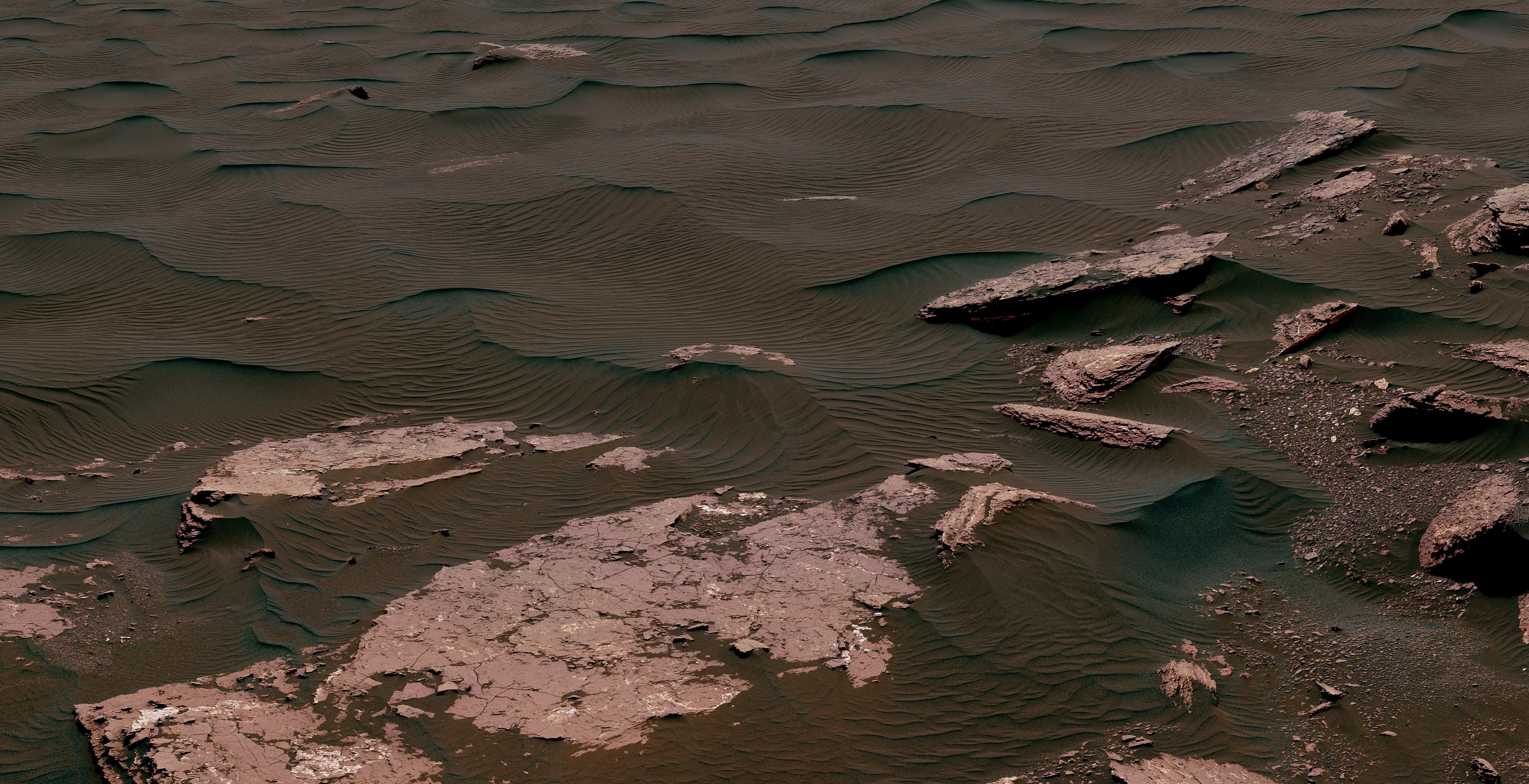 This view from the Mast Camera (Mastcam) on NASA's Curiosity Mars rover shows two scales of ripples, plus other textures, in an area where the mission examined a linear-shaped dune in the Bagnold dune field on lower Mount Sharp.

Crests of the longer ripples visible in the dark sand of the dune are several feet (a few meters) apart. This medium-scale feature in active sand dunes on Mars was one of Curiosity's findings at the crescent-shaped dunes that the rover examined in late 2015 and early 2016. Ripples that scale are not seen on Earth's sand dunes. Overlaid on those ripples are much smaller ripples, with crests about ten times closer together.

Textures of the local bedrock in the foreground -- part of the Murray formation that originated as lakebed sediments -- and of gravel-covered ground (at right) are also visible.
The image has been white-balanced so that the colors of the colors of the rock and sand materials resemble how they would appear under daytime lighting conditions on Earth.

The asteroid has a contact binary structure -- two lobes connected by a neck-like region. The largest of the asteroid's two lobes is estimated to be 2,000 feet (610 meters) across.

The resolution of the radar images is about 25 feet (7.5 meters) per pixel. 154 images were used to create the movie shown.

More information regarding asteroid 2014 JO25 can be found at https://cneos.jpl.nasa.gov/news/news196.html and http://www.jpl.nasa.gov/asteroidwatch.
Vrh

HELIUM-3 MINING ON THE LUNAR SURFACE

The idea of harvesting a clean and efficient form of energy from the Moon has stimulated science fiction and fact in recent decades. Unlike Earth, which is protected by its magnetic field, the Moon has been bombarded with large quantities of Helium-3 by the solar wind. It is thought that this isotope could provide safer nuclear energy in a fusion reactor, since it is not radioactive and would not produce dangerous waste products.

The Apollo programme's own geologist, Harrison Schmidt, has repeatedly made the argument for Helium-3 mining, whilst Gerald Kulcinski at the University of Wisconsin-Madison is another leading proponent. He has created a small reactor at the Fusion Technology Institute, but so far it has not been possible to create the helium fusion reaction with a net power output.

This has not stopped the search for Helium-3 from being a motivating factor in space exploration, however. Apart from the traditional space-faring nations, the India has previously indicated its interest in mining the lunar surface. The use of Moon resources was also part of Newt Gingrich's unsuccessful candidacy for the Republican party’s nomination for the US presidency in 2012.

Private enterprise is also interested in using fuel from the Moon – although possibly by extracting water rather than Helium-3. The Shackleton Energy company envisages providing propellant for missions throughout the Solar System using lunar water.

Some teams vying for the Google Lunar X-Prize also see mining as an ultimate goal of their landers. ESA has also considered using the Moon to help missions farther into the Solar System.

Arguments have also been made for mining Helium-3 from Jupiter, where it is much more abundant – it would need to be given the distances involved. Extracting the molecule from Jupiter would also be a less power-hungry process.

Not everyone is in agreement that Helium 3 will produce a safe fusion solution. In an article entitled "Fears over Factoids" in 2007, the theoretical physicist Frank Close famously described the concept as "moonshine". Either way, it seems we will have to be patient to find out the answers
Vrh