The Porsche 959 is celebrating its thirtieth anniversary. Back then, in 1985, a series of technical refinements put the 959 well ahead of its time—and its driving characteristics are no less impressive today.

It’s early morning in May of 1987 on the A6 autobahn near Hockenheim, two years after the car’s introduction. It’s time for the first independent test: the speedometer shows 260 km/h, the tachometer reads 7,600 rpms—time to shift into sixth. A brief pause, press the short gearshift into the far right corner, then the boxer engine in the rear continues its unrelenting acceleration. Three lanes and the shoulder are available, but the autobahn seems to grow narrower by the second; slight bends turn into sweeping curves; the usual suspects in the left lane are suddenly all on a lazy stroll.

We crank it up to 7,200 rpms, bringing us to a recorded speed of 317 km/h; it’s the car’s top speed. The noise level is surprisingly moderate; steering corrections are superfluous; nothing disturbs the flow; there’s no struggling against side winds or lane grooves. No sweaty palms. The car is as stable as other cars at 160 km/h, or 130 km/h. You have the control, but the technology does the work. It takes care of the risks, effortlessly surpassing the usual thresholds of motorized vehicles. “It can do things that cars can’t do,” writes a British colleague, aptly. This overachiever expects just two things of the driver: utter concentration and an unflappable sense of responsibility.

State-of-the-art back then, today a classic: Interior with a four-spoke steering wheel.

The Porsche 959: 1985, three decades ago, when it was presented at the Frankfurt International Motor Show (IAA), it was the most expensive, most technologically advanced, and fastest series production car in the world. And yet it was almost the slowest, as things would turn out. From the signing of the purchase contract (with a down payment of 50,000 deutschmarks, the equivalent back then of US$15,800) to delivery of the car, nearly two years would pass. Something of an appetizer had been served up in 1983, when visitors to the Frankfurt show were treated to a car that had all the visual features, and many of the technological characteristics, of the later 959.

At the time, the Porsche was still called the “Group B”—all-wheel drive, turbo-powered, anointed to mix things up on the rally scene in the then new Group B classification. But soon that class of motor racing fizzled out, and the 959 needed a new task. A bit of a no-brainer, really: its technical prowess was certain to make it a hot item among sports-car connoisseurs, the ultimate dream Porsche. Not to mention a demonstration of what the development department in Weissach was capable of when cost was not an issue.

But first, the 959 became the “learning car,” as project manager Manfred Bantle put it at the time. The aim was to break new ground technologically, on every front. “Some things did stretch beyond our original timeframe,” Bantle said. Another exacerbating factor was the typical Porsche obsession with perfection, with the ultimate achievement in mind, rather than a quick score. Nothing was overlooked. The only remnant of the 911 was the steel body structure, though here it was cloaked in fiber-reinforced plastic, along with aluminum on the doors and hood. All of this with sophisticated aerodynamics, of course; at these speeds, even the slightest bit of lift could be catastrophic. The 959 came in at precisely zero in this important category, combined with an exemplary Cd value of 0.31.

In the end, this tour de force traversed even the remotest fields of technology: double-wishbone suspension with coil springs in the front and rear, adjustable shock absorbers (sport, normal, comfort), and a hydropneumatic leveling system (120, 150, and 180 millimters) with automatic lowering at speeds over 150 km/h, all adorned with four magnesium wheels with central locking, hollow-cast with air pressure monitoring.

Until then, most of the aforementioned advances in automotive engineering had been mere visions of the future, and now they were bellowing their arrival in the here and now: this Porsche featured not only full-time all-wheel drive, but controlled all-wheel drive at that—an absolute novelty at the time. The 959 was ahead of its time with another feature too: the driver could choose between different programs—dry, wet, ice, and traction, activated by a lever under the steering wheel. A clutch with steel plates (hydraulically activated and electronically controlled) then directed a portion of the power to the front as needed. At a steady pace it was 40 %, and at full throttle 20 %. If maximum grip was required in front, up to 50 % flowed forward via the Cardan shaft and through the transaxle pipe. Another set of plates of this type was located at the rear axle differential, where it functioned as a variable lock (up to 100 %). Other highlights: the specially designed run-flat tires (from Bridgestone) and all-wheel compatible four-channel ABS.

The view reveals the technical highlights of the 959. The heart is the bi-turbo boxer engine with sequential charging.

The power that had to be distributed was astonishing. The 959 raised the bar to 500 Nm and 331 kW (450 hp)—unmatched among series production cars of the day. The source of these imposing figures was a boxer engine—so far, so 911. This engine, in traditional Porsche fashion, originated in motor racing, where it had put in race time in the 956, among others. And it was already water-cooled—at least a little bit; initially, the departure from air was restricted to the two cylinder heads, each equipped with twelve valves and two camshafts. A mere 2.85 liters of displacement sufficed for the diminutive engine; it was proof, if any were needed, that its potential still was not exhausted, as evidenced by its race-tempered brothers-in-arms. In the 961, the racing version of the 959, it put out 500 kW (680 hp).

The essence of the street-legal variant, then, was less about the absolute values and more about their derivation. Granted, two turbochargers were no sensation by the mid-1980s, but two turbochargers working in a sequential configuration certainly were. They were one-of-a-kind. The idea: down below a small exhaust turbine powers faster responsiveness; when the engine is revving higher, the full-size turbo kicks in for maximum thrust at up to one bar overpressure. The secret to its success was in the electronic control, which ensured smooth transitions and a harmonious unleashing of power. Other exclusives: polished titanium connecting rods, hydraulic tappets functional up to 8,000 rpms, a double-chain camshaft drive, and dry-sump lubrication with 18-liter oil volume.

Of course we all had an inkling back then that the 959 was well ahead of its time. Today we know it for a fact. It was even ten to fifteen years ahead of its kin in the Porsche family, and undoubtedly the gap was even larger when compared to the overall field of sports cars. It would seem to call for a test of the principle, in any case: a reunion with the 959, 28 years after the first test. Can it still impress in the here and now, this technological wunderkind of old? Would it impress us, the fortunate, pampered by hp and advancements galore? Two contemporary experts offer their assistance: rally legend, Porsche test-driver, and longtime 959-owner Walter Röhrl, and Roland Kußmaul, race engineer and part of the team that developed the 959.

First impression: somehow the 959 is still a classic 911 in spite of the wide tail. Inside too—upright seat position, the floor-mounted pedals, and the instruments. You sit shoulder to shoulder. Notwithstanding the generous width (1.84 meters), the 959 strikes one as narrow. Like a classic 911, then. Only the center console is different, sitting as it does above the transaxle pipe. On the shifting button, the “G” where one would expect the “1” for first gear stands for “Gelände”—German for terrain—a minor subterfuge to get around noise regulations, confides Roland Kußmaul.

Which program to choose, which damper setting? “Just leave everything as is,” recommends the engineer with a wink; today’s exercise is not really about the fine-tuning. Besides, everything’s dry and traction is good. While idling, the 959 rattles like an air-cooled beast, and it hits the road running. The clutch is tight and grabs late, but the steering forces are acceptable—after all, it was the first rear-engine Porsche with power steering. Under 4,500 rpms, it feels nimble, but no more nimble than a normal 911 of that era. It seems meek as a lamb, this turbo monster. One wonders what took one’s breath away back in the day. But then something happens in the rear. Suddenly it takes off, as if an afterburner had kicked in. The force catapults you into the cloth of the backrest, your head thrown backward by the rousing beast behind you. Reaching 7,300 rpms, shift up, shortly thereafter it’s the same thing all over again. And you have to admit it’s still impressive; very impressive, in fact. It shouldn’t really be a surprise, of course, if you glanced at the old figures: zero to 100 km/h in 3.7 seconds, 200 km/h in 13.3—figures that just about keep pace with the current 911 Turbo.

“It doesn’t bite,” was the bon mot that got things started. Although, when the phrase comes from the likes of driving legend Walter Röhrl, a healthy dose of skepticism is in order. “If you let up off the gas,” he says, “the tail rears up, but if you hit the gas again, it immediately stabilizes.” And that’s exactly how it went. You’re not dancing on a razor’s edge in the 959; it inspires confidence. Of course, the steering in its successors today is more precise, tighter. They’re faster, too, on their modern tires. But one thing remains unchanged: playing with that many hp with such a feeling of ease and absence of fear is exceedingly rare. Even today. 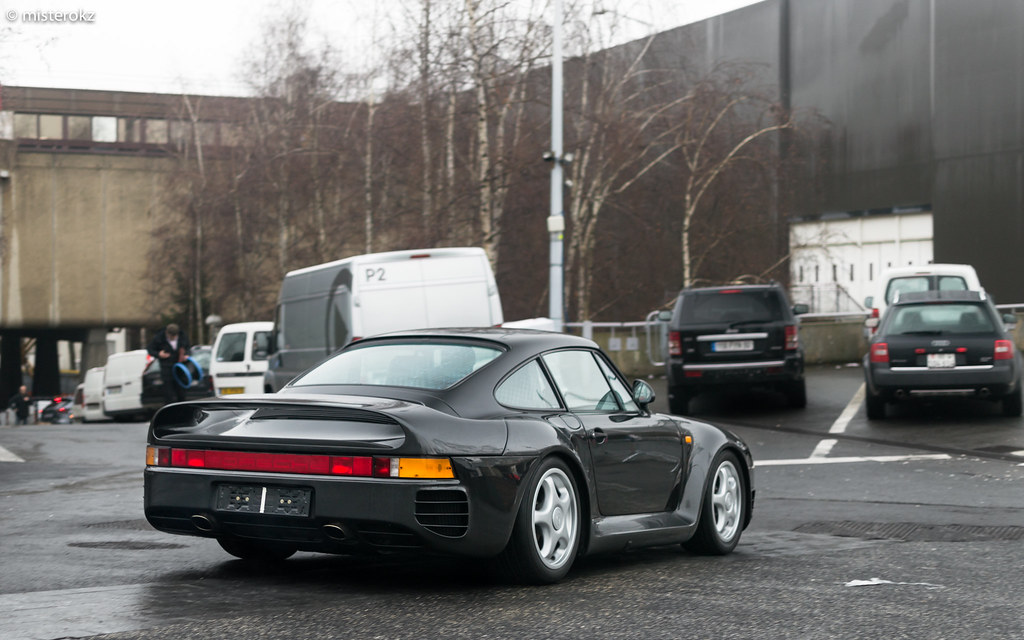