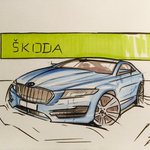 The new Skoda Octavia is on its way. Volkswagen revealed at the Moscow Motor Show that the hatchback will be unveiled before the end of the year and hit showrooms early in 2013.

The new Octavia - which was previewed by the five-door Vision D concept at the 2011 Geneva Motor Show - will be built on the same modular platform as the upcoming VW Golf MkVII, which is due to be unveiled at the Paris Motor Show next month.

Thanks to various weight-saving measures, the new chassis should mean the next generation Skoda Octavia is significantly lighter than the model it replaces. This weight saving, combined with an impressive range of diesel and turbo petrol engines from the VW Group stable, should ensure reduced emissions over the outgoing car.

And the new Octavia will be larger than its predecessor, too, in order to provide a clear distinction between it and the new Rapid in the growing Skoda line-up. Ovaj trougao je stvarno bedan kod stopova i ja se pitam kako nije postojalo neko bolje resenje.
There's nothing worse than making your hand and losing it all, because you were drawing dead to start with.
Vrh 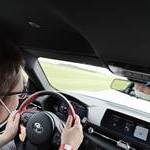