This Day In History: First Mustang Rolls Off Assembly Line 1964 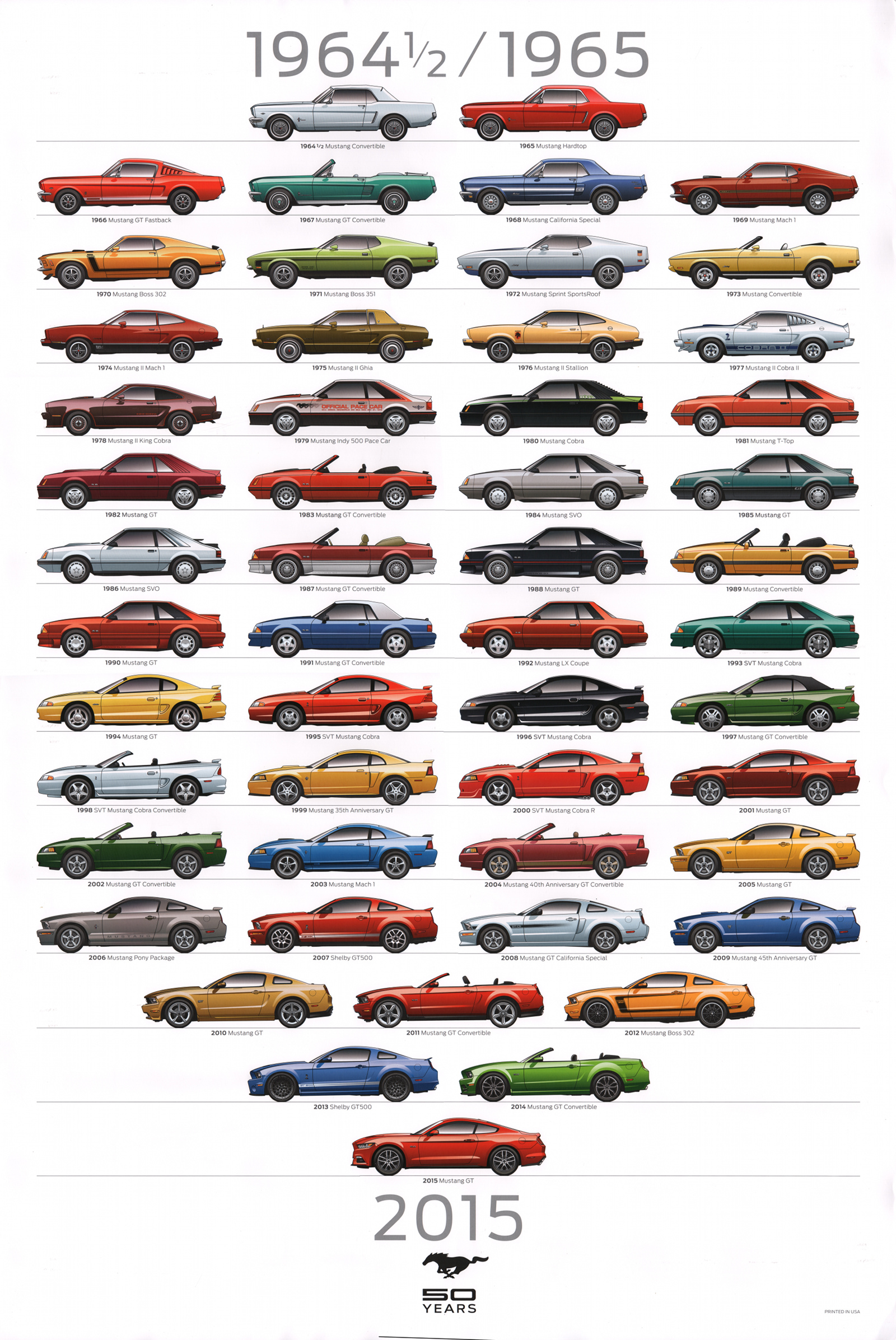 John Chun made an indelible print on Shelby history with his work on the 1967 GT500 and its logo, but his background is even more interesting. 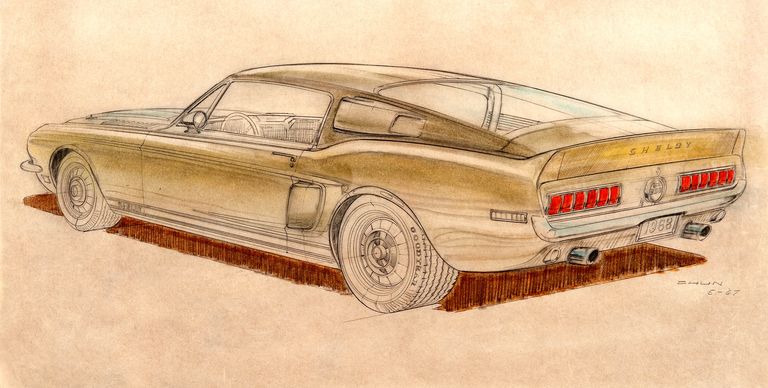 Tucked in a strip-mall between a gas station and a Dairy Queen, on the outskirts of Minneapolis, the Chun Mee restaurant seemed like any other mid-western family eatery. Booths and chairs were covered in red vinyl, the curtains were floral print, tablecloths and silverware utilitarian, kung pao chicken and wontons on the menu. Yet every so often, a wide-eyed stranger would stumble through the doors and stammer out a question.

“Are the rumors true? Are you him?”

John Chun's face would crease into a broad grin beneath the red Cobra cap he inevitably wore. He'd point to a faded photo of a Korean man standing next to a 1967 Shelby Mustang GT350.

Slowly, the visitor would realize that the place was filled with cars. Photographs and sketches hung everywhere on the walls, snapshots from a sun-faded California, a birthday card signed by Carroll Shelby. If you leaned in for a closer look, you'd see a signature carefully printed on drawings that would become lasting American icons of speed. John Chun escaped from North Korea twice, and you can still find his coiled cobra on every Shelby Mustang sold today.

He was born in 1928, north of the 38th parallel that would come to divide Korea. The country was controlled by Japan at the time, with Korean culture brutally repressed. By the time Chun was ten, occupying Japanese forces had outlawed even speaking Korean. Then, war in the Pacific.

As with Germany in the post-WWII period, Korea was divided in half by occupying Allied forces. The southern portion was under American control, while the north was run by the Soviet Union, and the Chun family's small town fell under the latter's jurisdiction. Chun's father, an engineer, clearly saw which way the winds were blowing and encouraged his son to go live with an uncle in Seoul while in college. John returned home only once.

"We realized right away that it was a mistake, that I might not get out again," Chun told Minnesota's Star Tribune in 2012, "So I snuck back to Seoul. I had to escape from my own hometown."

Chun fought for South Korea during the Korean war. Seoul was lost and retaken several times during the war as jet fighters screamed overhead, entering combat for the first time. The two final years of fighting turned into a brutal war of attrition, and when the war ended in 1953 armistice, Chun's family and birthplace was lost to him forever.

Following the example of a friend, he emigrated to the US as an engineering student, arriving in Sacramento in 1957. Despite a limited grasp of English, his practical skills impressed instructors, one of whom suggested he enroll at the Art Center College of Design.

Now known as ArtCenter, California's premiere design college has produced some of the most influential automotive designers in America. Notable alumni include J Mays, Chris Bangle, Larry Shinoda, Peter Brock, Chip Foose, Luc Donckerwolke, and dozens of others. Admissions officers looked over Chun's portfolio, and decided he made the grade. Tuition would be $350 a semester.

For seven long years, Chun attended classes from 9 a.m. to 4p.m., usually cutting class an hour early to go to work. For the balance of the day he worked a full shift as a mechanic at International Harvester, and later at a GM truck shop. He paid his own way, becoming the first Korean student to graduate from ArtCenter.

Finding a job wouldn't be so easy. Chun was in his mid-30s by now, and despite an impressive body of work, was considered too old by bigger potential employers. Ford, GM, and Chrysler turned him down. But then Fred Goodell, chief engineer at Shelby American, came looking for recruits, and saw something he liked in Chun.

"I had no idea what I was doing," Chun told the Star Tribune, "I'd just gotten out of college. [Goodell] didn't even tell me what I was supposed to do. He just told me to go to work."

Chun sat down at his desk in a converted hangar at Los Angeles airport, and began to draw. He was tasked with coming up with a concept for Shelby's followup to the inaugural Mustang GT350. Periodically, Carroll Shelby would stick his head around the door to see what Chun had come up with. The rangy Texan would often make off with a few sketches, always promising to return them. He never did, leaving Chun to start over from scratch.

But he did so cheerfully, time and again, adding his inputs to what would become the 1967 Shelby Mustang GT350 and GT500. As an experienced mechanic, he understood the practical roots of manufacturing and servicing better than most talented artists. Just how much of his work went into the 1967, 1968, and 1969 models is muddled by the years and Carroll Shelby's knack for self-promotion, but his sketches speak for themselves.
Chun’s updated Cobra logo.

And then there's the cobra badge itself. Over the course of six months, Chun cracked open encyclopedias to get a better sense of how the hooded snake looked in the flesh. He thought the original emblem Shelby was using lacked menace, so he drew, and drew, and redrew, and finally came up with the coiled, fangs-bared symbol that any Shelby fan will immediately recognize today.

After his work at Shelby, Chun lived a varied and interesting life. Now an established designer, he worked for Chrysler for a time, modeling an aggressive take on the Challenger that colleagues called the “Chunenger.” He had a hand in the Bradley GT kit car, was consulted by Hyundai on its first export-market car, and was even recruited by Tonka to help create the iconic line of chunky trucks in the 1970s.

He married his wife, Helen, in 1978, and they bought the Chun Mee restaurant in 1986. Last fall, after Sunday church, Helen carried a cup of coffee down to John's final resting place. She often did so, pouring the cup carefully into the grass by the headstone, its granite surface engraved with a coiled cobra. It was time to retire, she told her husband. Chun Mee closed its doors in October of 2018.
Chun and a GT500

John Chun died of stomach cancer on July 6, 2013, aged eighty-four. His name is still spoken by Shelby fans, but his legacy is often overlooked. To many, it may come as a surprise that such an iconic symbol of all-American automotive pride should have sprung from the pen of a North Korean immigrant who could barely speak English when he arrived here.

But perhaps it actually makes perfect sense, because John Chun's story is as American as it gets. He arrived in a land of opportunity, rolled up his sleeves, and put his shoulder to the wheel. He burned the candle at both ends, worked hard and started again and again, never complaining. He raised three children, two of whom are designers themselves. The restaurant he and his wife ran was a family place, a hub for the neighborhood.

He was, by all accounts, a humble, good, and worthy man. One who lived a long and happy life, proud of his past accomplishments, surrounded by family and friends. One who, if you asked him, would simply point to a picture of himself as a youth.
Najgore je svađati se sa budalom. Prvo te spusti na svoj nivo, a onda te dotuče iskustvom...